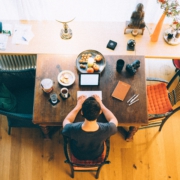 As American business communicators and long-time residents of Spain, we have edited more than our fair share of content – emails, reports, articles, project briefs, blog posts, you name it – written by people whose first language isn’t English.

Based on our years of “field research,” we’ve compiled a few suggestions to help non-native speakers avoid some common mistakes.

Here they go, listed in no particular order!

1 – There’s nothing wrong with contractions!

Native English speakers use contractions (don’t, won’t, she’d, he’d, it’s) all the time in both oral and written communications, yet some of our clients are decidedly “contraction-adverse,” considering them informal or somehow inferior to spelling out each and every word.

To be clear, texts that eschew contractions are grammatically correct yet can sound stilted to a native ear. If you are/you’re 🙂 still not convinced, for the sake of consistency, just make sure your text doesn’t mix them.

2 – Watch out for homophones

Homophones like there/their/there are easy traps for even native English writers yet add a layer of difficulty for non-native speakers. We’ve seen mistakes ranging from “this days” (these) to “in order to be affective” (effective).

The good news: you can catch nearly all mistakes by taking the time to re-read your text and using the spellcheck function! We also suggest doing a second-round edit with ProWritingAid or Grammarly, since they spot grammar and spelling mistakes often overlooked by MS Word.

Sentences with noun pile-ups (“female unemployment rate trends” or “technology revolution impacts”) are hard to decipher because they force readers to scan them at least twice to figure out which words are serving as nouns and which are modifiers.

To make it easier on your audience, either hyphenate where necessary (i.e. female unemployment-rate trends) or even better, clarify the concept by unpacking the components, as in “trends in female unemployment rates” or “the impact of the technological revolution.”

Long and meandering sentences might sound perfectly fine in some languages, but they generally don‘t translate well into English. If you’ve just written a sentence so long it could pass as a paragraph, review the points you want to convey and try to spot a natural place to break it up. Trust us, your readers will thank you!

5 – Use vocabulary that resonates with your readers

Your ultimate goal is to clearly convey your ideas in a way that resonates with your audience. With this in mind, stay away from obscure words and opt instead for those that your average reader readily recognizes and appreciates.